Welcome to my spot on the web!

Many thanks to those kind people who have made a donation or who have purchased a kit ! It is very much appreciated and it will enable me to upgrade my storage and download facilities :) I am glad that you have found my creations useful.

There is much on this site that may not be readily apparent. There are several ways to find your way around.You can use the links bar above to visit my most popular pages, use my archives or simply do a keyword search using the search engine in the navigation bar at the very top of the page.

If you find problems with any of my links not working, please do not hesitate to contact me by email or via my guest book and I'll will try to rectify the problem as soon as possible :)
I have had some problems recently with downloads from 4 shared and am in the process of moving them to another web storage. Please be patient.

And come back soon!

The Sixth Day of Christmas 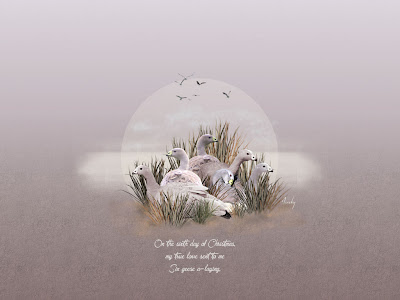 On the sixth Day of Christmas,
My true love gave to me,
Six geese a-laying......
When I was putting together this desktop, I had initially in mind a more styalized a version, but started thinking and finally decided to include some Australian geese and the desktop became more naturalistic.
These are Cape Barren Geese from the Southern Australian foreshores and nearby islands.
I have used a bit of artistic licence here as I'm sure that these geese would never be seen nesting in close proximity! They are probably monogamous and in reality quite aggresive during the breeding season which runs from June until September. [so they are definitely running a bit late this year]
The six geese of the song are said to represent the six days of creation.
In a zip file which you can download from my 4-shared storage, I have included, as well as various sized images, ones without text.
Posted by Judy at 19:55

IF YOU LIKE MY GRAPHICS AND FIND THEM USEFUL, WOULD YOU LIKE TO MAKE A SMALL DONATION ? 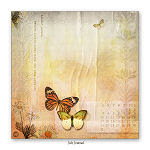 Thank You for Following Me!

I endeavour to use copyright free images [or those from whom I have obtained permission for use], when creating my graphics. All of my kits and images are for personal use only unless otherwise stated.
If you use my supplies in a tutorial..let me know and I'll add a link to it on my webpage!

My blog is listed in the Big Blog Collection